The Citadel of Hue City

The Citadel Complex of Hue, set up by Nguyen Dynasty from 1805 to 1945, is now one amongst the relics of the Hue ancient Capital – the World Cultural Heritage, capturing much of tourists’ attention.

The poetic and beautiful Hue of Vietnam was chosen to be the capital of the Southern Kingdom under Nguyen Lords’ Dynasty, and officially became the nation's capital under Tay Son Dynasty, King Quang Trung. The citadel palace complex is located on the North bank of Huong River ( Perfume River ), inside Hue city. It is a huge complex covering an area of 520ha and comprising three circles of ramparts, Kinh Thanh Hue (Hue Capital Citadel), Hoang Thanh (Royal Citadel) and Tu Cam Thanh (Forbidden Citadel). It was said to be protected by the two sand dunes: The Con Hen and Con Da Vien on the Perfume River, as "dragon on the left, tiger on the right". If you are in Hue, please join us in this small journey exploring the beautiful feudal palace, the inspiration for numerous artists ever stepping inside! 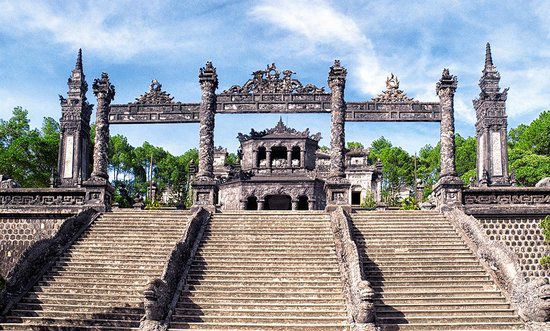 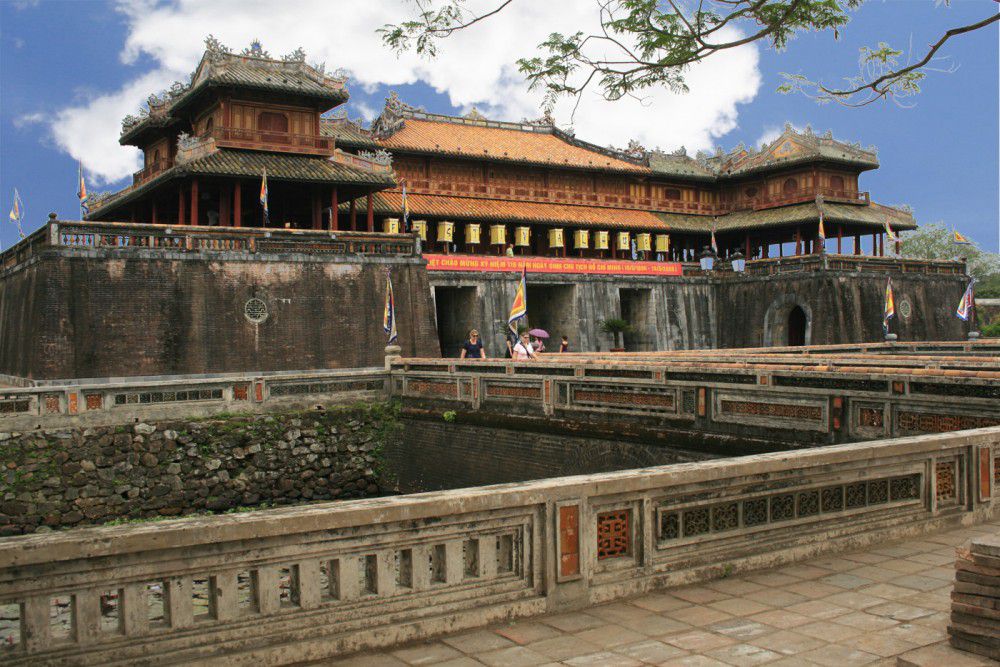 The very first stop-over is the exterior circle, the Kinh Thanh Hue (Hue capital citadel), which started to be constructed in 1805 under the reign of Emperor Gia Long and was completed in 1832 under the sovereignty of Emperor Ming Mang. Over the past 200 years, it has still maintained original with nearly 140 small and large constructions. With a square shape, it is almost 10km in circumference, 6m high, 21m thick, with 10 entrances. On the top of the walls, 24 bastions are established for defensive purposes. Besides, the Citadel has an ancillary gate connecting the Tran Binh Bastion called the Tran Binh Mon (Peaceful protector Gate).

Now we get further into the second circle, the Hoang Thanh (Royal citadel), also the most important part of the Citadel, which was built in 1804 but totally completed in 1833, under King Ming Mang’s reign. The Citadel, which is more than 600m long for each side, was built with bricks of 4m high, and 1m thick. Around the citadel is a protecting trench system. Tourists can get access to the Imperial Citadel through four entrance gates. In the past, Ngo Mon Gate was only reserved for the King. Royal Citadel consists of more than 100 fascinating architectural works divided into numerous sections:

- Section of the Ngo Mon Gate and the Thai Hoa Palace: used for various grand ceremonies.

- Section of the Kham Van Palace and Co Ha Garden: is where the princes studied or relaxed.

Passing through Hoang Thanh, we enter Tu Cam Thanh (Forbidden Citadel). Situated inside the Imperial Citadel complex, behind the Throne Palace, the Purple Forbidden Citadel was reserved for Emperor and his family. Built in the early 1803 under reign of Emperor Gia Long, it was initially named Cung Thanh. In 1821, it was renamed into the today’s Tu Cam Thanh.

This citadel part was built with brick walls of 3.72m high, 0.72m thick, and about 1,230m in circumference. Its front and back sides are 324m long respectively, while the left and right sides are both more than 290m long. The whole site consists of 50 architectural constructions of different sizes and 7 gates for facilitating the entrance and exit. Dai Cung Mon (the Great Palace Gate) is in the front side, only reserved for the Kings. Can Chanh Palace was the place for daily working of Emperors. Can Thanh (Emperor's Private Palace), Khon Thai Residence (Queen's Private Apartment) were reserved for the Queens. There are still many other sections, for instance, Duyet Thi Duong house (Royal Theatre), Thuong Thien (the kitchen for the Kings' food), Thai Binh Lau (King's reading room), all of which are of great architectural value, luring uncountable visitors who are interested in feudal architecture.

Should you ever come inside the citadel, taking a look into the special feudal relics of immense architectural and cultural values, you will surely more or less love the traditional and classical side of Vietnam. As time goes by, thousands of changes have occurred, the precious historical and classical beauty of the nation would never be gone!

Standing for over 200 years and consisting of over 100 fascinating architectural works almost remained unchanged, the Royal Citadel is an ideal place for those wishing to better understand an architectural and cultural beauty as well as an important history of Vietnam. Joining a city tour and visiting Hue Citadel - the not-to-be-missed attraction when you travel to Hue will give you a better understanding of the architectural and cultural beauty during an important phase in Vietnam history.