Deep beneath the dark earth, hidden from screeching bombers and harbouring desperate soldiers, the people of Vinh Linh, Quang Tri lived for many years in the now famous Vinh Moc Tunnel. They survived, and even prospered in their makeshift underground community. During that time, 17 children were born in the tunnels, each of whose lives is a testament to just how perfect the complex network of caves and warrens were at protecting those forces within. As time goes by, it has become both a historical evidence and a tourist destination for discovering a heroic period of Vietnam’s history.

The DMZ (a tunnel complex of Vietnam), lies on the south of China Sea, north of Ben Hai River. Within this complex, Vinh Moc tunnel is located in Vinh Moc, Vinh Thach Commune, Vinh Linh District, Quang Tri Province. The complex in Vinh Linh has as many as more than 60 tunnels such as Tan My, Mu Giai, Tan Ly tunnels, among which Vinh Moc is the most solid and firm village tunnel, with 3 floors and round staircase, still remaining as in its past days. 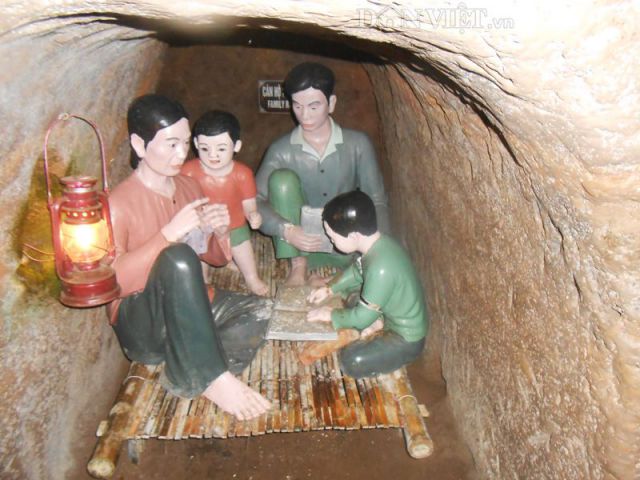 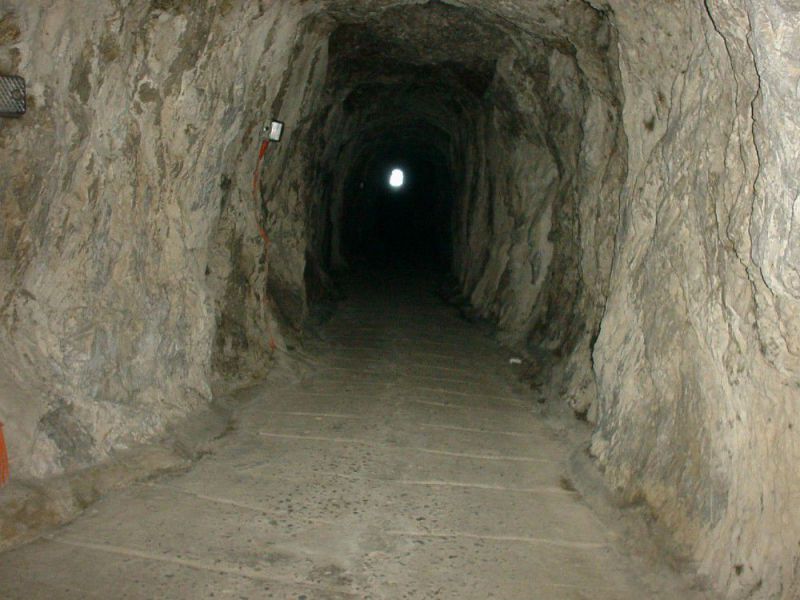 The tunnel soil is a dense clay, allowing easy hands digging of the tunnels. Air caused the clay to harden, making the walls extremely strong. The tunnel network's total length is nearly 2 km, structured into three floors with the first 13 m beneath the ground, the second 15 m, and the third, 23 m. The village tunnel was built in over two years and required approximately 6,000 cubic metres of earth to be dug out. The main inner axis is 2,034m long, 1-1.2m wide, and 1.5-4.1m high. The two side cliffs are moulded into small temporary houses every 3m. The tunnel center has a 150 seated hall, clinics and maternity place. It is linked to the sea by seven exits, which also function as ventilators, and to a nearby hill by another six.

Those known of Vietnam’s heroic historical war must have some understanding of the tunnel network in Quang Tri citadel – a witness of the severe war. The Vinh Moc spectacular tunnel network within the zone stands as a testament to the endurance, wisdom and bravery of the local people in their fight for independence.

The Vinh Moc tunnel complex was built to shelter the people of Son Trung and Son Ha communes in Vinh Linh county of Quang Tri Province. It was constructed in several stages, beginning in 1966 and coming into use until 1971. The complex grew to consist of wells, kitchens, rooms for each family and clinics. Around 60 families lived in the tunnels; as many as 17 children were born inside the tunnels as well. Finally, the tunnels were a success and no villagers lost their lives thanks to them. The only direct hit was from a bomb that failed to explode, the resulting hole was utilized as a ventilation shaft.

Historical Name. "Their real name is Son Vinh Tunnels," one designer witnessing this said, "From the very beginning we called it Son Vinh tunnels. Son means mountain and Vinh not only refers to Vinh Moc, but to the Vinh Linh people. The people of Son Trung and Son Ha communes and the men of border-post also helped build the tunnels."

Ten years after the war had ended, I heard that the Vinh Moc Tunnels were opened to tourists. Arriving at the tunnels tourists always put their hands on the wooden planks to feel how cold they were. These days, the government is striving to preserve their existence.

Historical story. In the mid-1960s, the area was a burnt and blackened wasteland, constantly under attack from the US. During a meeting of the local Vietnamese soldiers to discuss how to stop all the constant casualties and better protect the community, some put forth the idea of moving the people underground. For them, it would be meaningless if the local people could not be protected since without the people their post would cease to exist.

After the meeting, an initial plan to construct a U-shaped tunnel on the seaside cliff was put forward. The US had not yet begun using the infamous B-52 bombers at Vinh Linh, but it was only a matter of time. As the plan manifested, the soldiers followed up with two A-shaped tunnels, connecting them with the U-turn and forming a connected chain of tunnels and bomb shelters. This initial network also acted as a base to retaliate against the enemy if they landed at Vinh Linh and conveniently as an entry point for supplies to the Con Co Island nearby.

Yet, of course it wasn’t that simple. The tunnels needed 5m-deep ventilation openings, and as the community within expanded, they had to develop wells, kitchens, bedrooms and health-stations. The tunnels also had to store provisions for the army and locals, and had to be able to house as well as transport hundreds of tonnes of rice. The tunnels are not just famous for the uniqueness of the constructors’ endeavor, but for the meticulous ingenuity of their design. All the kitchens required chimneys, which had to be able to disperse their smoke without attracting enemy planes, no easy feat for a designer who was trying to fight a war.

When the underground channels were designed, the designers had the foresight to consider their protection as well as their construction. They must be well against damage long, tropical rains, and monsoon. Architects would like to visit this historical and solid shelter to figure out how their elders could succeed in constructing such a complex, huge, but firm and sufficient place of living. The tunnel is accurately a miniaturized image of a deep underground village with all necessary services (houses for all families, birthplace, health-stations, etc.), but can stand still firmly until now. The answer may be revealed in a heroic mentality and great endeavor of the people in that historical period.

Today, people no longer need the tunnel to shelter but consider it as one of the top destinations of some history-discovering tour. You are fond of history, and you prefer adventure, the foremost suggestion is a visit to Vinh Moc tunnel!

How to get there

Vinh Moc tunnel is usually included in tour itinerary for DMZ tour from Hue city at most travel agencies. As the local transportation from Hue to this area is not very easy for foreigners to navigate, it is recommended that tourists planning to visit this area book a tour. There are a lot of day tours from Hue to DMZ area in Quang Tri for tourists to choose from. Look at some itineraries offered and pick one that is most suitable for your time-frame and liking. Some itineraries for reference can be found here : day tour from Hue