Some foreign tourist ever said to me: “Da Nang city, well, a magnificient landscape – full of mighty mountains and sparkling rivers – has indeed lured me”

Location. Da Nang is the fourth largest central city of Vietnam, after Ho Chi Minh city, Ha Noi and Hai Phong. It has an area of nearly 1,260 km², and a population of 752,493 people. Together with Hue, Da Nang is the city in the South Center Coast, on the coast of Southern Asia Sea, the middle of Vietnam. 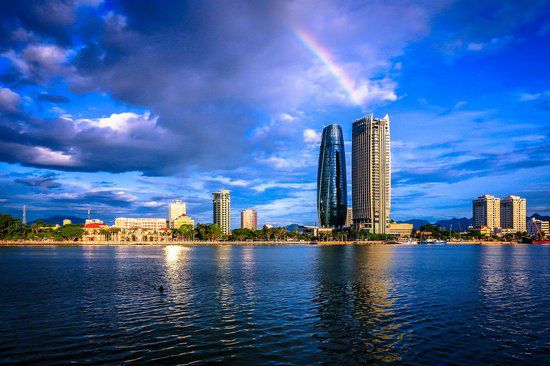 The city itself has neither the atmosphere of Hanoi nor the hustle-bustle of Ho Chi Minh City, but has its share of sights, and is close to the charms of Hoi An and the imperial capital of Hue. Why do they call it the seaside & riverside city? Because Da Nang is a picturesque city by the Han river, and by the coast of the East Sea with distinctive attractiveness in comparison with other sea cities, luring hundreds of thousands of tourists from around the world!

Danang is in a typical tropical monsoon zone with high temperature and equable climate. The city’s weather is a combination of climatic features of northern and southern Vietnam, with the northern having the more distinct influence. There are two seasons; the wet season lasting from August to December and the dry from January to July. Cold spells occasionally occur in winter, and are not severe and short. The annual average temperature is 25.9oC. The highest temperature is 28-30oC in the months of June, July and August. The lowest is 18-23oC in December, January and February.

The city is in the site of the East Sea and Han River with special different charms. Nature has offered the city a great position among three World heritages generously: ancient royal capital Hue, ancient city Hoi An and Holy land My Son. Thanks to this, Da Nang plays an important role in hosting, serving and transferring visitors. Not only being in the middle point of three world heritages, but also does it have numerous unforgettable beautiful scenes.

Danang has the high and dangerous Hai Van Pass with full of perilous obstacles, engraved “the most grandiose beauty spots in the world”. Son Tra peninsula with numerous small beaches and island - an ideal rendez-vous for tourists, which is surrounded by Da stream, Bai But, Bai Rang, Bai Bac, Bai Nom - the beautiful alluvial plains which bring relaxing moments for tourists on being ingulfed in the splendid dawn and the quietness of crepuscle in a picturesque land. The eco-tourism resort Ba Na - Mo Stream is considered as Dalat, Sapa of Central Vietnam and the legendary Marble Mountains – “a beautiful landscape of the southern heaven and earth”.

Mentioning about Danang, tourists can not forget the poetic Han river and its bridge - the first swing one in Vietnam. This is the great pride of Danang people. The Han River bridge - the symbol for new vitality and the developing desire of the city - was built with the contribution of all the city's people. It seems that all poetic features of the Han River can be only expressed deeply in the space of Han river bridge with full of wind and ventilation. It not only facilitates transport and potential for tourism, wakening economic prospects of a vast area in the eastern city but is a cultural spot of Danang people today left behind for the future generations.

Danang is also endowed with sea - the vast tourist source of inspiration. In addition to beautuiful and clean stretching beaches, Danang seaport is one of the most well-known seaport in Vietnam.

Besides the magnificient sceneries, the city is the home to the Museum of Cham Sculpture as well as the ancient pagodas of Hai Chau Pho Da Long Tho, where tourists can hide themselves in an artistic and religious life!

Da Nang people are very keen on participating in the city traditional festivals. It is an opportunity for everybody to come to dedicate their prayers for good weather to facilitate the argricultural seasons and to be more loser, for the ancestors' support and to pray for  for good luck to their close relatives and friends. Danang festivals have a lot in common with those of the coastal areas in Central Vietnam but bear lots of specific features and distinctive beauty of the region. In the festive days, with the whole colorful area and thrilling songs of praying peace, ardent rhythm of "bai choi". The festivals in Danang City were originated long time ago,passed from generations to generations such as Cau Ngu festival, Avalokitecvara festival, Hoa My village festival, An Hai village festival etc. Time went by, many festivals were not generated such as "Pastor festival" - a very special one for pastors only, naughty children with muddy legs and bareheaded.

Besides the bustle of the city center, there are ancient villages and traditional trade villages hiden by the range of bamboos in the city's suburban areas of Da Nang. Outside the city, Phong Nam ancient village, Tuy Loan ancient village have a vast view of rice fields, small paths under bamboo shade and sometimes feeling peaceful atmosphere of hens' sound in the afternoon. In the village, there still remains the old-aged communal houses through ups and downs of the city history. However, there are sacred holy atmosphere but to be very close to the spirit of Quang Nam and Danang people.

Da Nang, the city on the site of Han river, is a fascinating romantic coastal and friendly destination that deeply worths a visit! If you do not spend at least a day here, you may feel regretful!